Legendary actress Sridevi who gave us a wonderful cinematic experience since her childhood passed away this year on 24th February. Her death not only left her family in shatters but fans all over India mourned the loss together. On her 55thbirth anniversary this year, we would like to take a walk down memory lane. Her achievements in Bollywood have not only been outstanding, but groundbreakingtoo to a certain point.She became the first female superstar in theIndian cinema. A career that spanned over five decades and an array of amazing roles in over five different languages have left us feeling the real loss of the actress.

The Start Of Her Cinematic Career In Bollywood

Sridevi’s start of cinematic career began at a very early and ripe age. Her very first film was a Tamil movie,and at that time, she was a mere four year old child. She started working in other Tamil, Telugu and Kannada films and later on made her debut in Bollywood as well. She was just thirteen when she stepped foot in Hindi films. After receiving praise for her work and starring in many successful films, she had quickly established herself as a noteworthy and leading actress in the industry. She received widespread recognition after her role in 1983 Himmatwala. After that, it was a joy ride with hits after hits and fan flowing across the globe. A few films did flop, but it amounted to nothing compared to the outstanding roles she was giving the Indian audience that time. Her last stint would be in television between the years 2004-2005 in Malini Iyer.

A Comeback With A Heart-Warming Performance

After a short but well-deserved break she came back with English Vinglish. In the year 2017, she played one of her best roles in the movie, Mom. She won the national film award for best actress for her performances in the movie. She has been awarded the Padma Sri which is our country’s fourth highest award. The actress may have worked with legendary actors like Amitabh Bachan, Dharmendra, and Jeetendra but she was no less of a legend herself. 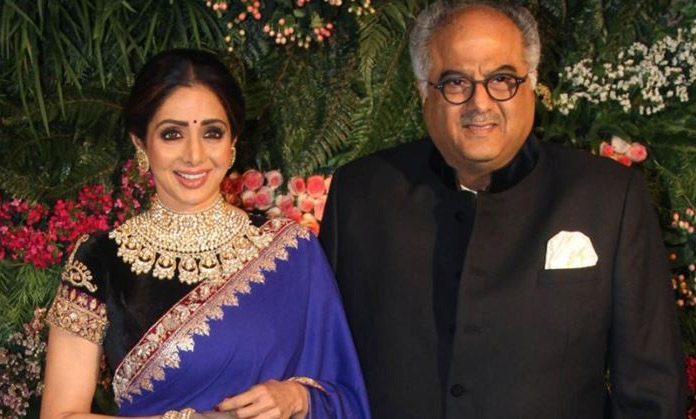 Sridevi has left behind two beautiful children with husband,BoneyKapoor. It’s no secret that BoneyKapoor was previously married before he met Sridevi whom he fell in love with. After having her signed for Mr. India,Boney proposed to her within a few years. The duo had become attached on the sets of Mr. India and BoneyKapoor later confessed to her that he was in love with her from the first sight. Very romantic isn’t it? They completed almost 21 years of marriage on 2nd June 2017 and are called as the power couple of that era. Without a doubt, Sridevi’s legacy still lives on in her daughters and husband. Her daughter JhanviKapoor is said to be already working on films in the industry.And we couldn’t be happier to see Sridevi’s daughter on screen soon, taking her mother’s legacy forward.