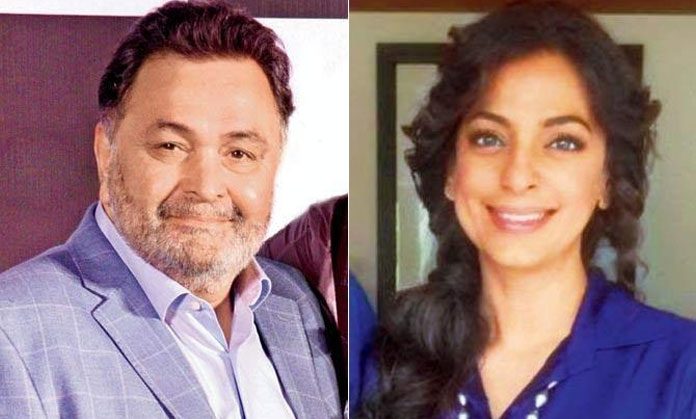 The teaming up of Sony Pictures and India’s MacGuffin Pictures has created a pair up of Juhi Chawla with Rishi Kapoor. The iconic duo will be doing a film together after their last movie which was in 1996. Daraar had bought together Juhi Chawla, and Rishi Kapoor. This time around, a new venture will be seeing the duo back again in an Indian family comedy. This reunion will be special, and we’re sure the project too will exceed all expectations. They have worked together before in films like Bol RadhaBol (1992), Ghar Ki Izzat (1994), SarahankeGhar (1994) and a few others.

The untitled project will reportedly be set in Delhi. The comedy-drama is something to look forward to, considering the on-screen chemistry and experience of both these actors. The production of this film too seems to be heavily underway with amazing writers and directors on board with the clean and fun project. The writers of the film will be Hitesh Bhatia and Supratik Sen who also was a writer for Kai Po Che! It will also be directed by Bhatia.Hence, the vision and idea look to be pretty solid for this newest venture.

We cannot wait to see Juhi and Rishi together on screen again. Taking from the past, we’re sure that both of them will be giving a stellar performance and we’ll be clutching our bellies laughing and relating to the themes in the writing and acting. The cast and crew working on it are big names and talented people. So, you can be assured without a doubt that this will be a good film. A film to sit down and laugh with your whole family.

What the producers have to say about the project

A quote from Sony Pictures Entertainments managing director clearly defines the goals they will be trying to achieve with this film, “As we continue to ramp up our local production slate with a keen focus on stories that audiences have never seen before, we are extremely thrilled to get started on this family comedy.”

Abhishek Chaubey and Honey Trehan who is a partner in Macguffin Pictures also had something to add,“As producers, we’ve always been interested in making films across the genre spectrum, and I feel this is the perfect film for MacGuffin Pictures to break into the comedy family drama genre.”From what the producers have to say were genuinely excited to see how this turns out.

With nothing but high expectations from the cast and crew working on this film, we might have put them on a pedestal that they’re inevitably going to fulfill for the audience. A clean comedy family drama has not been Bollywood’s main priority as of now. New and upcoming themes have taken all the limelight. But we’re ecstatic at the thought of having this again, especially with two great actors like Juhi Chawla and Rishi Kapoor.