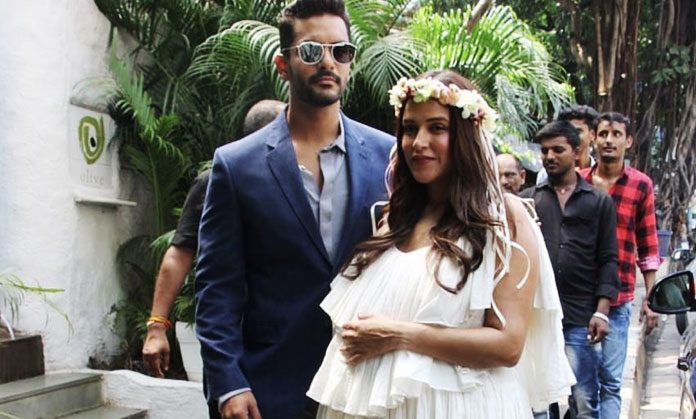 Bollywood Actress Neha Dhupia, who is expecting her first child, was given a wonderful surprise by husband Angad Bedi. Angad hosted a dreamy baby shower for her on the 30th of September. The ceremony took place at the Olive Bar and Kitchen, Bandra, Mumbai, and was star-studded with many celebrities from the industry.The beautiful actress had married her long-time best friend, actor AngadBedi on the 10th May this year. The wedding was a traditional Sikh ceremony at a Gurudwara in Delhi and was a hush-hush affair involving family and close friends.

The baby shower was a fun affair where the couple spent their special day with friends from the Bollywood industry and outside. Filmmakers Karan Johar and Siddharth Roy Kapoor were a part of the event too. Actors like Janhvi Kapoor, Ishaan Khatter, Sonakshi Sinha, Preity Zinta joined in the celebrations as well. Kiara Advani,Sophie Choudry,Ileana D’Cruz, Shilpa Shetty, Arbaaz Khan were amongst many who attended the celebrations.Bollywood couples Suniel Shetty and Mana Shetty, Kunal KhemuandSoha Ali Khan joined in too. The mom-and-dad-to-be posed with friends for the cameras during the baby shower.

The star-studded attire at the ceremony

The couple arrived hand-in-hand at the venue and complemented each other well. The dad-to-be wore a blue formal outfit with round sunglasses. Mommy-to-be, Neha chose to wear a simple yet elegant white flowy outfit which she paired with a tiara.

Karan Johar, who happens to be one of Neha’s closest friends, was looking dashing in a pink shirt paired with ripped jeans and cool sunglasses.

Also, many others from the industry looked great as they arrived for the event. Bollywood Actress Shilpa Shetty looked like a diva in a shirt dress by Nupur Kanoi. Bhumi Pedneker was one of the head turners in an adorable orange dress. Actress Janhvi Kapoor looked stylish as ever in a Prabal Gurung dress. 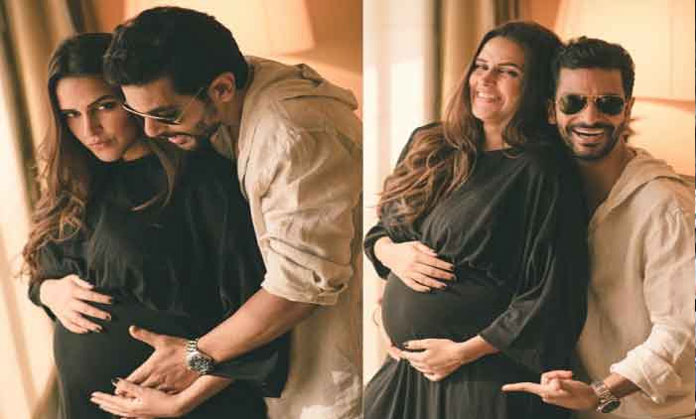 How it all began…

It all started with Neha Dhupia announcing her pregnancy on her social media account with an incredibly adorable picture with her hubby. Many of the couple’s friends congratulated them by posting Instagram stories and sharing pictures. A few of them also shared the cake cutting video of the couple. Something that couldn’t go unnoticed in the pictures was the pregnancy glow on the face of Bollywood’s newest mom-to-be.

Soha Ali Khan, who is one of Neha’s closest friends, was one of the first celebrities to share a picture from the celebrations. She shared a lovely picture of Neha Dhupia along with actress KonkanaSen with the caption “Through thick and thin.”

Jolly LLB 2 actress HumaQureshi actress also gave a glimpse of the celebrations by sharing videos and pictures on her Instagram account. She wrote: “With the gorgeous glowing mama to be”. Along with it, was a group picture with Neha, Karan Johar, Janhvi Kapoor, Kiara Advani, and Sonakshi Sinha.

Angad Bedi also made an activity on his Instagram account to post pictures of wife Neha in her baby shower outfit. He wrote, “My baby’s baby shower.” Now all the pictures and videos prove that the couple is all excited for their first born. The celebration was a happy affair indeed! Good luck to the couple for welcoming a new member in their family soon.