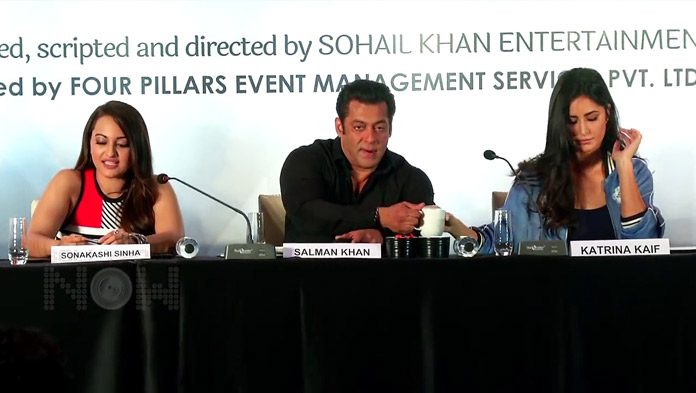 Salman Khan is believed to be the person who introduced young KartinaKaif to Bollywood about 15 years back and they both evidently share a great and friendly relation ever since. The pair have also worked together in several Bollywood films like Yuvraaj, Partner, Maine PyaarKyunKiyaand recently, an action film Tiger ZindaHai, which is a sequel to their 2012 Bollywood action thriller film, EkTha Tiger. The chemistry between Salman Khan and Katrina Kaif is largely praised by millions of their fans and in fact, they both have openly appreciated working with each other; the chemistry that you will get to see as they perform together during the Da Bangg the Tour 2018 concerts.

There has long been the rumours over the relationship of Salman Khan and Katrina Kaif- in fact, there are fans that simply go stubborn about ‘Bhaijaan’ and the ‘Welcome’ actress getting married, though there hardly is any official revelation about this allegedly affair.

Recently in a video, Salman khan and Katrina Kaif is spotted sharing a mug of coffee at one of their press meet in association with the Da-Bangg The Tour- Reloaded 2018, and fans couldn’t help themselves from making the video viral quoting them as ‘Couple goals’. Though they aren’t couple but rather great friends (just mostly rumoured to be couples- may be), they certainly appear adorable while working together and do share a great bond. So, relationship or no-relationship, having them together on this grand live show will sure be particularly interesting and admirable for all their fan base.

Salman Khan and KartrinaKaifare supposed to give few great performances together during the concerts, which certainly their fans are eagerly awaiting. Moreover, many otherpopular Bollywood actors including, Daisy Shah, Jacqueline Fernandez, Prabhu Deva, SonakshiSinha, and singer Guru Randhawa would be accompanying the pair and would be taking the show to United states and Canada by the end of June.

Da Bangg reloaded 2018 Pune was the last stop for the actors, and are getting prepared for the concerts that are queued up for June 22nd – July 8th. Setting the beginning of the concert line-up at Atlanta, Da Bangg the Tour Reloaded concert tour will be covering Chicago, Dallas, San Fransisco, Vancouver, Washington DC and New Jersey in sequence before delivering their final concert at Toronto on July 8th.

While they are all tight scheduled actors, they are still spotted doing all their rehearsals and practices just right. Especially Salman Khan, who is clearly caught up between promoting and shooting for his upcoming films, was quoted saying what efforts it takes for him to match up with his talented co stars’ performances.

Whatever, we know this Bollywood team is going to bring a different experience of entertainment for their US fans through Da Bangg Reloaded 2018 and that is going to be somethingreally memorable for both stars and their fans.