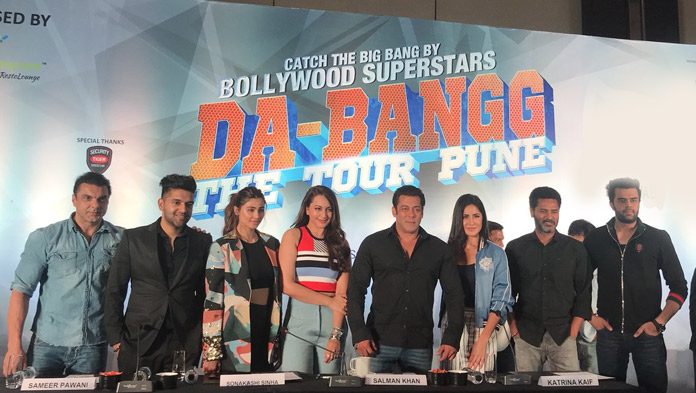 With so many movie shoots, shows and promotions to deal with on almost an everyday basis, Salman khan sure is one busy person. Even so, he hardly overlook a chance to meet and connect with his fans in different corners of the world. His Da Bangg concert tour concept is Salman Khan’s latest means to connect with his fans. Next target for this Da-Bangg Team is US and Canada.

First of what he called ‘Da Bangg the tour’ happened last year,  as he and a bunch of top Bollywood celebrities had set out on a world tour, holding concerts in multiple cities including Melbourne, London, Hong Kong, Delhi etc. Not only has he and his Da Bangg star team won the hearts of their entire audience in India, but has got appreciation internationally as well, for the beautiful performances they delivered and the great concerts they pulled together even amid their tight schedules.

In the concert that was organized in New Delhi, India by the end of 2017, Salman Khan was seen singing live, taking away the hearts of many. Despite of all his talents and performances, he so easily and humbly praises his co-stars and even go so far as to make fun of himself saying it is too difficult for him to keep pace with the performance of his co-performers.

Sahil promotions is the chief promotional partner and organiser for the event. With Salman Khan Leading the event, some of the most elegant and glamorous divas of Bollywood showcasing their dancing skills and with India’s best anchor Manish Paul (and may be Sonakshi Sinha too!) hosting it, wecan expect a memorable night at the Da Bangg Atlanta and other concerts queued up in US and Canada.

Based on what we have seen in the previous Da Bangg concerts tours and from  the promises of the celebrities, we can be pretty sure there will be just lot of great performances, music, fun and even surprises- just the right recipe for a world class entertainment. May be we’ll get to see him singing live in his US Da-Bangg reloaded concerts too!

Bhavesh Patel, the head of Sahil promotions was quoted saying how unique this event would be for North America. ‘A Bollywood concert tour like this has never happened in North America’, he said. He went on to promise that he and his entire team will be putting efforts to make this event happening and memorable in all senses for the audiences as well as for the celebrities. He believes that with the efforts that they are putting forward and with the transparency that they are maintaining, everything just going to be right at their places.

So it is the time for all the American and Canadian Bollywood fans to gear up, get the Da-Bangg reloaded 2018 concert tickets (before they are all sold out) and wait for the evening to happen.